Even though marijuana is legal or recreational use in nine states and Washington, D.C. as of 2019 and for some level of medical use in 46 others, employers can still fire you if you test positive for weed in a drug test.

Despite marijuana’s new status, legalization efforts have mostly stopped short of offering workplace protections to employees who use marijuana off-duty by prescription, let alone recreationally. That may be changing, however, after a federal court decision on a Connecticut case in September of 2018.

The takeaway, however, is that in most cases throughout the U.S., you can be fired or refused a job solely for testing positive for marijuana.

What do the courts say about employee testing for marijuana?

Certain types of employees are required by the U.S. federal government — which against all evidence, still treats weed as if its use carried dangers similar to heroin — to “piss clean” at all times. These include mainly transportation workers like train conductors, airline pilots, and military personnel.

Whether or not these types of employees can be fired for medical or recreational drug use isn’t in question. Employers can also fire you if you bring marijuana to work or are high on the job — this isn’t in question, either.

But the legal uncertainties come into play concerning non-transportation companies that contract with the federal government and other private employers whose employees don’t affect public health and safety as part of their duties.

In a landmark 2018 case, a federal judge found in favor of a job applicant and medical cannabis user against her potential employer.

Can your company lose its contract with the Feds if it knowingly employs people who test positive for cannabis?

That was the question the courts addressed in the case Katelin Noffsinger vs. Bride Brook Nursing & Rehabilitation, the complainant, Noffsinger, is a Connecticut medical marijuana patient who consumes cannabis in the evenings as a treatment for post-traumatic stress in accordance with that state’s medical marijuana law.

When she applied for the job, Bride Brook acknowledged she was qualified. Noffsinger notified them in her interview that she was prescribed marijuana from a doctor. Still, Bride Brook rescinded the job offer when Noffsinger tested positive.

Why is marijuana a focus of employer drug testing?

Cannabis use leaves a long-lasting footprint on our physiology. The cannabis metabolites most employee drug tests measure tend to stick around in urine for a week or month, depending on dose. Conversely, cocaine, alcohol and other so-called “hard” drugs often clear from the system in hours or a day. 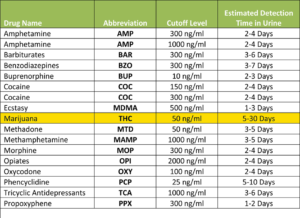 Not only do marijuana metabolites stick around longer, but there’s no good way to tell whether the test subject was high when techs administered the test or whether they smoked weed off-duty days ago.

Read our full article about how long weed stays in your system.

What are the current laws on drug testing employees?

If you’re in the military, work for a federal contractor dealing with transportation or more broadly, are a transportation worker of any kind, you probably have to abstain from both medical and recreational marijuana in order to keep your job.

What is less clear is where other employers stand. Only nine states, including Connecticut, offer worker protections about off-duty marijuana use, according to the Associated Press.

“These laws generally state that an employer cannot fire an employee based on the employee’s status as a medical marijuana cardholder or participation in a marijuana program,” according to WorkplaceFairness.org. “However, some states, such as Arizona, Delaware, and Minnesota, explicitly address drug testing and state that a positive drug test alone cannot automatically be a reason to refuse to hire someone or to fire someone.”

Read our related article on how to pass a marijuana drug test.

According to the Society of Human Resources Management, anecdotal evidence suggests that many non-transportation, non-heavy machinery jobs are dropping cannabis from their testing panels altogether. But those efforts are patchwork and voluntary and don’t mean you’re safe if you work at a drug-free workplace now.

Some states, for example, have a specific set of circumstances that the courts will recognize as “reasonable suspicion” of drug use, which will allow employers to test you. Other states allow random testing provided the employers to give advance notice.

Case law is fairly uniform in saying you can be drug tested randomly if you work in transportation or if your job could otherwise affect the public’s health and safety, like handling dangerous chemicals or classified material.

“Off-Duty Marijuana Use: Can I Be Fired for Smoking Pot Legally?”