Using a bong is often thought to be a less harmful option than smoking a regular joint by the average cannabis user.

In fact, together with the extremely intense effects a bong can produce, it’s one of the main reasons why cannabis users use a bong:

They think that the water inside a bong filters out harmful by-products like tar, that develop as a result of combusting plant material.

Well, while the water inside a bong indeed filters out a significant amount of toxic by-products that develop as a result of burning your dry herb (like the filter inside a cigarette filter out some tar) …

Studies have shown that the same water also filters out a significant amount of cannabinoids.

In this article, we’ll explore why using a bong isn’t necessarily a less harmful method than smoking a joint, to consume your cannabis.

But first let’s start with…

Why Smoking Cannabis is Harmful to Your (Respiratory) Health

The two biggest reasons why people smoke marijuana are: 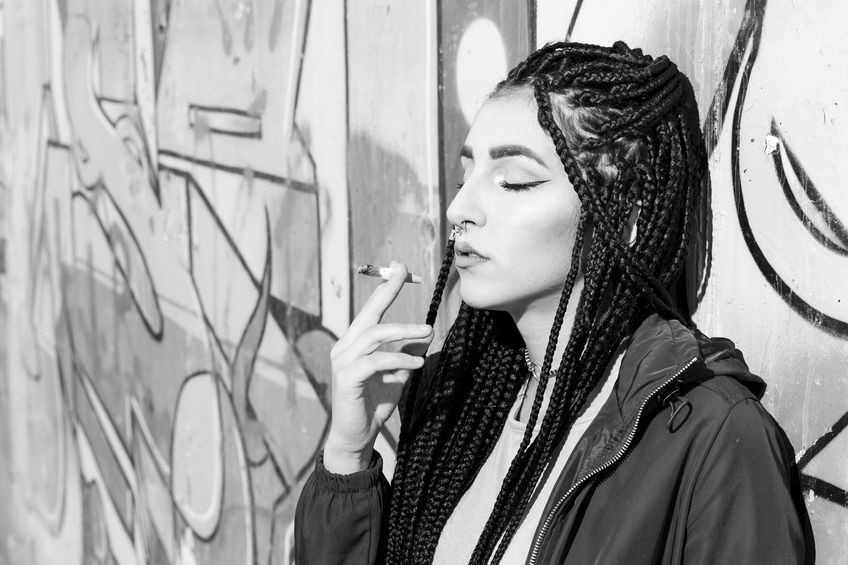 Now, if you’re just looking for the effects that smoking marijuana produces, why not simply eat it?

Cannabinoids need to undergo a process of ‘decarboxylation’ to become active and readily absorbable by your body. This decarboxylation process is only possible through heating the cannabinoids in their pre-decarboxylated from.

Burning your cannabis is one way to achieve that.

But the act of burning plant material, whether that’s marijuana, tobacco or any other type of plant, always creates toxic by-products. So, when you’re smoking, just as you’re inhaling the decarboxylated cannabinoids that give you the effects you’re looking for, you’re also inhaling a large amount of these toxic by-products like tar.

Read our full article on Does smoking cannabis cause lung cancer?

In that sense, smoking cannabis isn’t much different than smoking tobacco…

Some researchers think that the cannabinoids in marijuana have a protective effect on the lungs and respiratory system and that’s why this link has never been found.

Science did find a link between smoking marijuana and various respiratory symptoms like wheeze and smoker’s cough.

Bottom line: All these toxic by-products that develop as a result of burning your marijuana are harmful to your health.

What if we could find a way to filter out these toxic by-products? Then we could smoke cannabis in a less harmful way…a bong maybe?

The Problem with Bongs

It’s true: Bongs have a large compartment with water, that filters out a large part of these toxic by-products that develop as a result of burning your cannabis.

But what most people don’t know is that a study done in 2001 found that this same compartment with water inside a bong also filters out a large part of the decarboxylated cannabinoids that get released as a result of burning your marijuana. 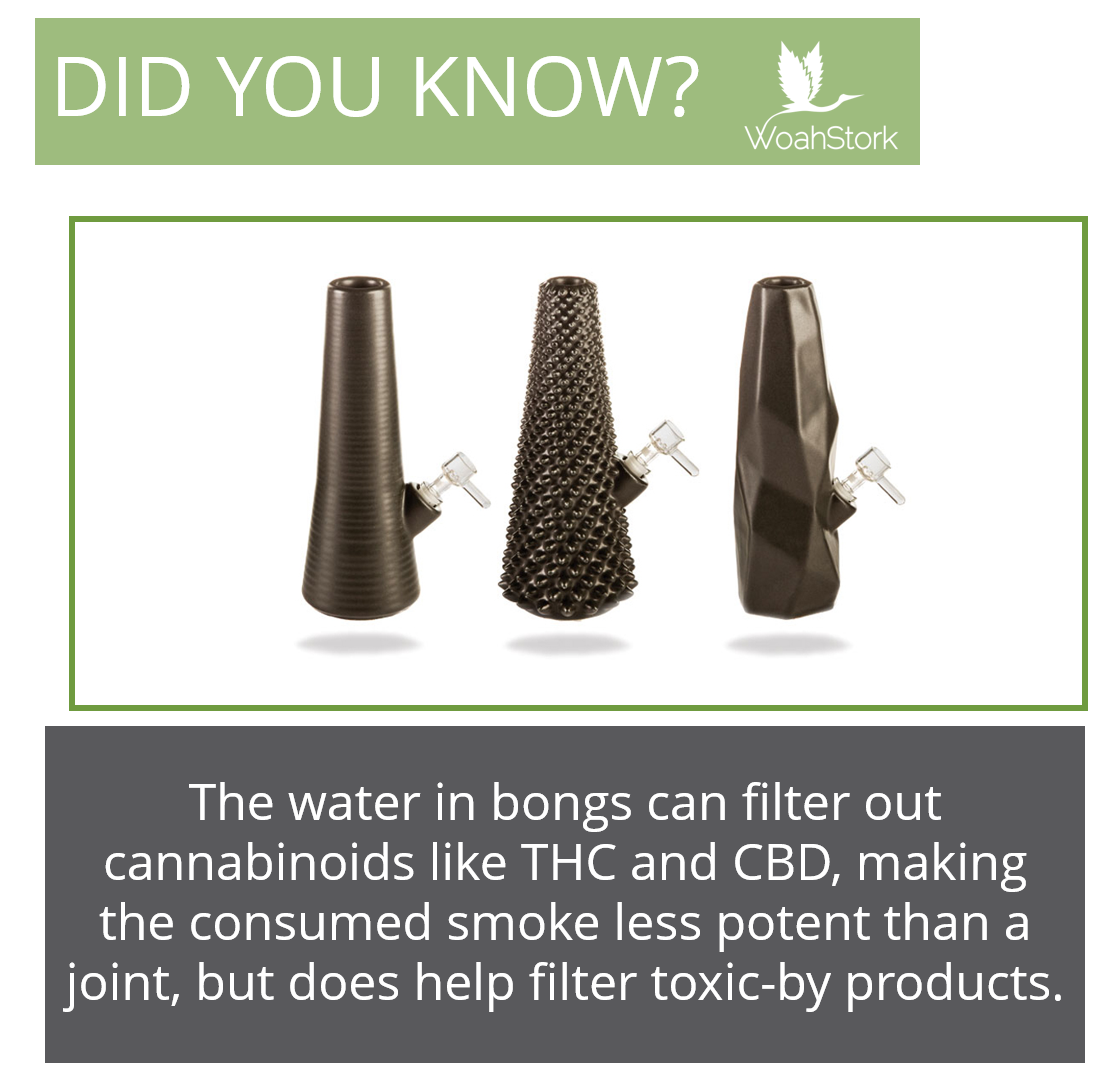 Well, the researchers theorize that cannabinoids are relatively sticky compounds and therefore get easily trapped by physical filters, like water.

In fact, the researchers found that the cannabinoid-to-tar ratio of bongs was lower than of a regular joint.

By using a bong, you might, in fact, be inhaling more tar than with a joint, if you want the same concentrations of cannabinoids.

Alternatives to Bongs and Joints

Now you understand why a bong might not necessarily be a ‘healthier’ option than smoking a joint to use your marijuana, let’s explore some alternatives.

Dry herb vaporizers heat up your marijuana high enough to decarboxylate all the cannabinoids inside it, but low enough to prevent it from combusting.

While opinions range from a 50% till 95% reduction in toxic by-products, what researchers do agree upon, is that a vaporizer reduces the production of toxic by-products that would’ve normally get produced through the act of smoking, significantly.

And the best part is that vaping doesn’t decrease the cannabinoid production either. With a dry herb vaporizer, you can get very high concentrations of cannabinoids, with a very significant reduction of toxic by-products like tar.

Just make sure to get the right one. One that comes from a well-respected manufacturer.

Another option are edibles. Marijuana edibles usually come on the form of cakes. Important to note here is that edibles only work if the marijuana inside your dish was heated for a period at a relatively high temperature. Remember the decarboxylation process? The process that changes the cannabinoids inside marijuana to their active and readily absorbable form? It only occurs when you heat the cannabinoids.

The problem with edibles is that they’re infamously tricky to dose and the onset of effects is late. That means it’s easy to overdo it with edibles.

Depending on the country/state you live an easier-to-dose option for you could be cannabis oil. With cannabis oil, you only need a few drops usually to get your desired effects. Cannabis oil usually contains high amounts of THC and therefore is illegal in most countries/states.

Another option, if you’re only looking for the effects associated with CBD, is to get a full plant extract CBD oil. CBD oil is legal in most countries and states and also an easy-to-dose alternative to smoking CBD-rich strains for example.

Maybe you’ll explore other methods of consumption to use your marijuana.

Whether that’s using a weed vaporizer or an edible in the form of a cake or oil, that’s up to you.

When you’re ready to make the switch from your bong or joint, visit Herbonaut, where they review weed vaporizers, cbd oils, grow equipment and have a balanced discussion on the risks and benefits of cannabis-derived and cannabis-related products.

5 Tips For Making Your Glass Stay Looking New For Longer

Glass (bongs, pipes, etc.) can be pricey! Follow these tips to protect your investment and keep your glass looking new for longer. [Read More…]

Through thousands of years of use, humans have developed the best ways to smoke weed. Here are the most tried and true methods. [Read More…]

Looking For Your Next Piece? Check Out Headdies

Your piece is a piece of art. Always on the coffee table, in plain view to all your home’s visitors, your bong, bowl, or rig makes a definitive statement about your personality. With their catchphrase “not your grandfather’s pipe”, Headdies aims to [Read More…] [Read More…]