Smoking marijuana has become a practically omnipresent activity throughout popular culture. The observation that most children ask their parents about “pot” before the age of 10 goes to show just how frequently marijuana is mentioned in movies, TV shows, video games, and the news.

Often times, those who smoke marijuana are referred to as “stoners” by the popular media. The term “stoner” can be quite polarizing since many marijuana smokers don’t fit under the umbrella that society has cast in their attempt to categorize the behaviors of someone who regularly smokes. I, for one, don’t appreciate being lumped into the categories of lazy, messy, and insatiably hungry. Stoners have had to take the offensive and demonstrate their success in order to combat such erroneous stereotypes.

The writers behind popular programming are partially to blame, but understandably so. They want to be able to have their characters relate to as wide a demographic as possible. Since smoking marijuana is such a common activity, but it can’t be explicitly shown or states across all age groups due to FCC regulations, writers must cleverly insinuate that one person or another is a stoner. The perpetuation of the stoner stereotype is the easiest way for a writer to tag a character as “high” and, thus, set the stage for the viewer/reader to imagine what it would be like for that character to experience subsequent events while in this heightened state.

Thus, while it continues to reinforce a rhetoric that doesn’t faithfully represent the demographic it is attempting to connect with, insinuative writing about stoners at least gets us the ability to recognize a character as a marijuana smoker without compromising familial values.

With that being said, we’d like to feature some of the best ways writers have slyly worked the concept of marijuana into cartoons – a perfect display of how to balance the desire to convey a persona-type (quite possibly for the enjoyment of the parents that also watch these shows) while responsibly avoiding exposing children to material they may not be ready for. As if living under a rock in Bikini Bottom wasn’t enough to clue you off to Patrick always being “stoned”, his antics are that of the stereotypical stoner. He’s always eating, forgetting things mid-conversation, and falling asleep. Basically, all this Pokemon does is sleep and eat. Sounds like he’s on a steady diet of Indica. There was definitely something “off” about this show. Always eating pizza and getting themselves into some seriously trippy predicaments, Ren and Stimpy feel a lot like Harold and Kumar.

If the seven dwarfs all represent the archetype of a common personality, then Dopey would certainly be the stoner. Always in loose fitting clothing and stumbling around, Dopey definitely acts like his name – which is by no coincidence a common slang term for marijuana. This trouble-making penguin is the stoner of the Sanrio family. Always on the outskirts and making trouble, Badtz Maru represents that which is frowned upon in Japanese culture: illegal drug use. Broc from Pokemon is almost always eating one of those omusubi snacks from the show.
When he’s not hitting on every single woman he sees with absolutely no shame, he’s showing utmost confusion by not remembering which girl is who. There’s definitely a reason behind why Broc’s favorite pokemon type is “rock”. Winnie the Pooh is always on the hunt to acquire his favorite munchies of all time: honey. With a “honey belly” always forcing his shirt up, honey smeared all over his hands and face, and a general tendency towards clumsiness, it’s hard to imagine that Pooh didn’t roll up some tree in the Hundred Acre Woods. South Park breaks all the rules. Towlie is an explicit and stereotypical stoner. While he struggles to remember the beginning of a sentence while he’s midway through it, at least he always remembers to bring a towel…

Gudetama is a personified egg yolk that never wants to get out of bed. He is also ticklish when poked with chopsticks. Enough said. 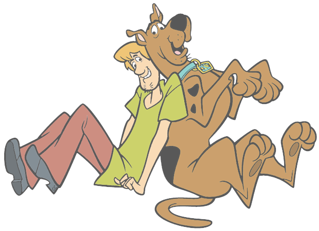 Always on the hunt for more Scooby snacks, Scooby and Shaggy are the epitome of cartoon stoners. Whether they are exiting out the back of a smoke filled “mystery van”, disappearing for long stretches of time, or displaying general confusion, Scooby and Shaggy are clearly high for the entirety of the show. The creators don’t even really try to hide it all that much, either. I mean…Scooby “Doobie” Doo.
Come on…

WoahStork helps you find the perfect product for any occasion. While certain cannabis will almost certainly make you tired and crave donuts and pizza, others can keep you active, alert, and creative! The WoahStork Strain Genie is here to help you navigate the 1000s of cannabis products available in your area so you can order the right ones online!