Everyone knows it has something to do with cannabis, but what specifically? Where did the string of numbers 420 even come from?

There are a ton of rumors about its origins, but, in this article, we aim to dispel the myths and unveil the truth behind the cannabis community’s most celebrated string of numbers.

420 is cannabis community lingo for both the date and time that match the digits. It’s easy to see how 420 translates to April 20th (April is the 4th month of the year).

Even easier is the allude to the time of day. 4:20 comes twice a day (thankfully): AM and PM.

April 20th is known around the world as “Weed Day”. The stoner holiday is a celebration of all things cannabis. With secret smoke sessions organized across the world, it’s a date to gather your friends, order from WoahStork, and live life to the highest.

If you’ve spent any amount of time on internet forums geared towards 18-25-year-olds, you’ve heard the term 420. Often times accompanied with Microsoft Paint memes, the three digit string has grown to be practically synonymous with online cannabis culture.

420 has also made its way into the legal cannabis industry, with tons of dispensaries and businesses include the three digits into their name. 420 has become a useful phrase to communicate to people “in the know” that you are “down to smoke” without letting non-partakers cast judgment. It’s kind of a secret-slang amongst the cannabis community.

420’s association with cannabis, which, until recently, was associated with counter-culture, sparked an underground movement to acquire 420 Mile Marker signs– the signs that denote which mile you’re at on a particular stretch of freeway.

Having a 420 Mile Marker sign hanging in your dorm room is admittedly pretty awesome. It not only publicly discloses that you’re down with the herb, but that you are willing to go the extra mile to prove it.

The theft of these signs became such a problem that local governments had to replace the sign with 419.9 signs, which are more than .1 away on the “cool” scale compared to the 420 signs.

Regardless, stealing these signs is a felony and the cannabis community should do a better job of representing themselves and the association of 420.

The term “420 Friendly” has even become industry lingo for “it’s okay to smoke weed here”. If you’re a regular partaker, be on the lookout for the code in your next Airbnb reservation.

The 420 term is so popular that the Medical Marijuana Program act, which established guidelines for Prop 215 in California, has the California Senate Bill Number 420 (SB 420). Even though the clerk who named the bill has never been identified to confirm this was non-coincidental, it is almost certainly a nod to the 420 tradition.

Okay. It’s clear that 420 has something to do with cannabis and this “something” is celebrated twice a day and, majorly, on April 20th. However, what does 420 mean? Where did the term come from? We dive into that next.

There are a TON of misconceptions about the origins of the term. Many are convinced that it emerged from police code (i.e. the codes police use on the radio to discretely update fellow officers of situations) for “marijuana possession”, much in the same way that “187” became interchangeable with murder. However, that’s just not true. There is no 420 police code.

The true roots of the term root back to none other than Marin County in Northern California — debatably one of the absolute chillest places in the world. Not only does Marin County boast some of the best weather and scenery in the world, they also have a stronghold of Grateful Dead fans. It’s easy to see how Marin County is quite conducive to cannabis use. If any place in the world had the potential to so intensely infiltrate cannabis culture, it was Marin. 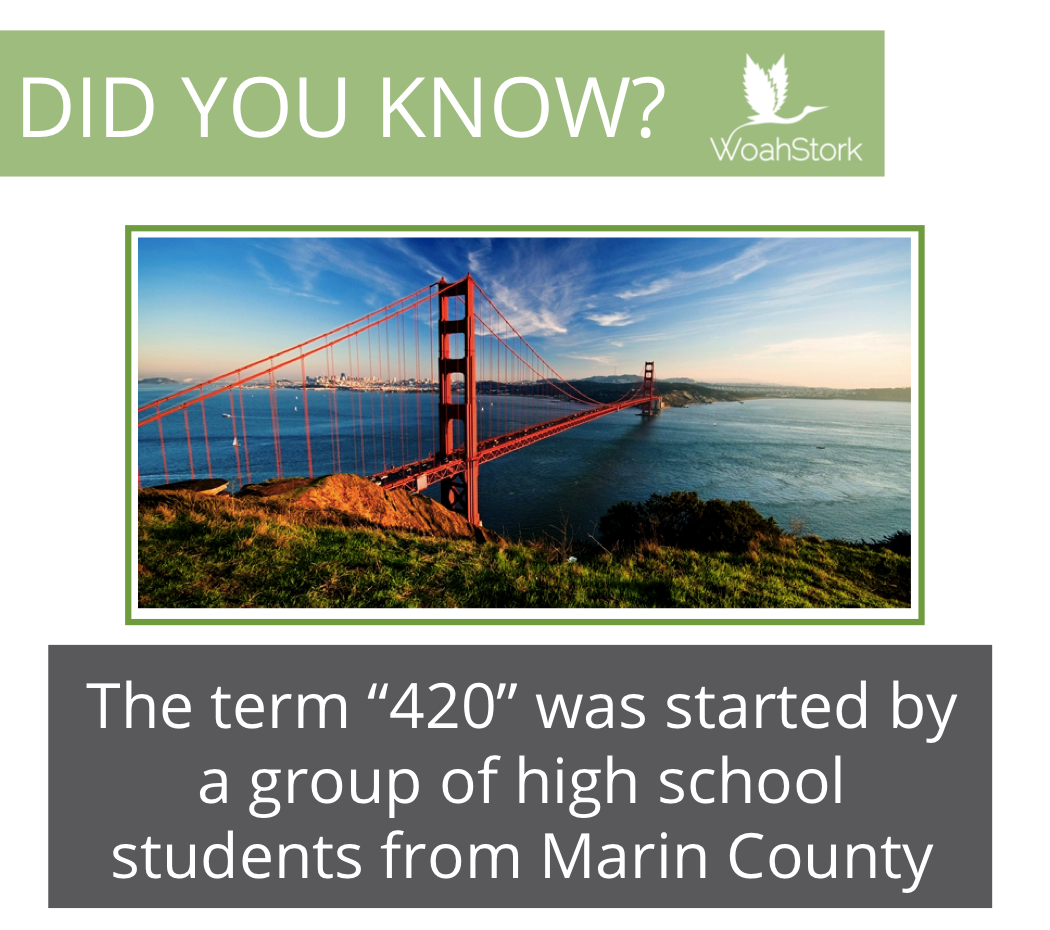 The term got its start in the early 1970s from a group of high school students in San Rafael. It seems these high-school students have quite the prowess for infiltrating vernacular; “Damn Daniel” was started by a couple of clownish high-schoolers and took the world by storm, infecting consciousnesses everywhere, in under 24 hours.

The group of high-schoolers even had a name: “The Waldos”. Naming themselves after the fact that they liked to hang out in front of a wall, Waldos would routinely light up once school got out at 4:20pm. Before that, the Waldos would meet at 4:20 to search for a rumored abandoned cannabis farm.

Saying “420” to one another in the hallways was a quick way to communicate their enthusiasm for their upcoming activities. The term quickly spread to encompass all communications that were cannabis-focused like “do you have some?”, “wanna smoke?”, or “do I look high?”.

The rest is history. In a day and age where secrecy was of high concern, having an established code-name for cannabis was incredibly useful to protect your privacy, avoid judgment, and avoid the law.

Stoners are known to have their own language and 420 has definitely made its mark on marijuana vernacular. So, this 4/20, order from WoahStork light one up for the now famous Marin high school students that gave weed it’s most prolific code name.

The US Government Has a Patent on Cannabis

In perhaps one of the most unfortunate unveilings of irony, the United States government awarded itself Patent Number 6630507 entitled Cannabinoids as antioxidants and neuroprotectants (Hampson, 2003). You read that correctly. The very same government that has allocated millions of taxpayer dollars [Read More…]

In honor of the holidays, WoahStork has teamed up with Litt California to bring you the best 420 deal in Los Angeles. Litt is a small batch artisan cultivator who uses a strictly controlled hydroponic system to produce the highest THC potency [Read More…]

Smoking Weed As A Kid Doesn’t Necessarily Make You Dumb

Whether you are a worried parent, an ambitious teenager, or just a curious psychonaut, you’ve probably wondered if smoking weed as a kid makes you dumb. With services like WoahStork making cannabis more easily accessible, it’s important to ensure that the age-old [Read More…]