Australia might have become an even more desirable destination for visitors, tourists and even companies looking to invest, with the recent country-wide legalization of cannabis for medical purposes.

Cannabis is still illegal for recreational use although the particulars of relevant laws vary, by State and Territory, as shown in this chart.

Below: The Legal Status of Cannabis by State / Territory 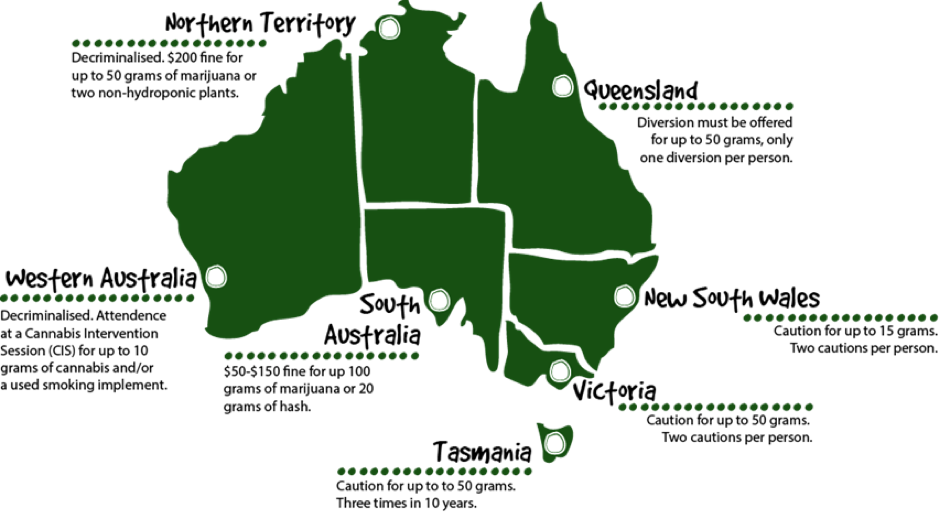 Greg Hunt, Health Minister, says he wants Australia to be the world number 1 exporter of Cannabis

The 2017 announcement of legalization was made by Australian Health Minister, Greg Hunt who has publicly stated his goal – to put Australia in the number 1 position in the world as an exporter of the increasingly popular and successful drug. Declaring ‘early’ (relative to some other Western countries)  gives Australian businesses the chance to get ahead of the competition, in the race to provide the world’s supply.

The potential market for Cannabis has exploded, both domestically and internationally, in recent years. Forecasts estimate that Australian cannabis products have the potential to reach $1 billion in sales revenue by as soon as 2020.

Why does Australia want to become the world’s leading exporter of Medicinal Cannabis?

The primary aim of Hunt’s goal is to assist the developing domestic market to grow – essentially safeguarding supply for Australians who need Cannabis for their personal ailments.

Longer term, being able to export the product will helps the farmers increase their production and profits, as well as delivering the required support for the domestic market.

Below: Medical Cannabis Will Help Australians With This Growing List Of Ailments

Here are a few potential reasons why Australia is planning to become the largest exporter of legalized cannabis.

By developing a local Cannabis market, the government is providing a solid and reliable base for local producers, who can later expand their operations. International growth will mean an increase in production and provide a gradual, low-risk method of providing jobs and tax revenue for Australia.

While the local patient base is small, (Australia has approximately 25 million inhabitants, roughly as many as Texas) exports will empower the domestic market to develop quality medicinal products for overseas countries, too.

2) Increase in taxes and investments

The Australian government is naturally conservative in both senses of the world. The in power Liberal party, of which Mr. Hunt is a member, has a similar focus on the free market, jobs, and growth, as can be seen in the UK Conservative party and US Republicans.

As such, they are keen to increase the inflow of investment into Australia, and legalized Cannabis will help with the structure of a healthy economy. Experience in Colorado has shown Cannabis will increase revenue generated from taxes and will produce investments, which will contribute to the GDP of the country.

The area is an exciting opportunity strategically – because of the rapid growth of the sector. The global market is likely to hit $55 billion in revenues by 2025, and Australia naturally wants to enjoy its share.  Given the vast amount of agricultural land available in Australia and the climate which lends itself well to Cannabis crops, the cannabis industry could become Australia’s modern gold rush.

The market outlook for legal Cannabis

Cannabis has become a hot topic in Australia and appears with increasing frequency in the media. With more and more countries favoring legalization for medicinal and even now, recreational purposes, public sentiments are in shifting here, as they have overseas, in favor of total legalization. According to research by NDSH, close to 84% of Australians support the legalization of cannabis for medicinal purposes, with support in every state.

According to another report, around a third of Australians are likely to try cannabis at some point in their life. Millennials and Generation Z are more likely to support the use of the drug, whereas baby boomers have a higher propensity to vote against the medicinal use of the drug.

There is no denying in the fact that legalization in Australia is a revolutionary move not just for cannabis culture, but also for the people and economy of the country. Shares of companies involved in the production and export of Cannabis in Australia have grown by more than 130 percent since 2017,  almost six times higher than their competitors in U.K, Canada and the U.S.

That said, Australia has not lived up to the excitement Greg Hunt’s announcement generated last year. Medical sales are stymied by Medical Professionals who lack sufficient science to be able to morally prescribe Cannabis to their patients. In simple terms, there are alternative drugs available with peer-reviewed proof behind them and, when it comes to Cannabis-based drugs, the research is just not there yet.

With such fast progress in other parts of the world, especially North America, and incentives created by these eye-catching global revenue forecasts, the truth is that if Australia wants to be number 1 in the production of legal Cannabis, a great deal more work needs to be done than a simple announcement by the government.