On our Magic School Bus ride on a puff of weed smoke, we learned how the body absorbs, processes and excretes the components of marijuana when you smoke it — cannabis pharmacokinetics following inhalation.

If you missed Pt. I of this journey, read up here

But cannabis edibles follow a different route than smoked or vaped cannabis.

That means it’s time to hop back on the bus and take a ride on a weed brownie to watch the whole digestion process, from scarf time at the party to Candy Crush in the loo the next morning.

Part of processing edible marijuana — if you want to get high from eating it, that is — needs to happen outside the body. This is called “decarboxylation.”

Delta-9 Tetrahydrocannabinol (THC) is the most potent psychoactive chemical in marijuana, but the plant doesn’t make the chemical in that form. In raw pot flowers, the THC — along with the other cannabinoids in the plant — occurs in acid form, or THCa. The chemical structure that makes THCa acidic is a group of carbon and oxygen molecules, or a “carboxyl” group. 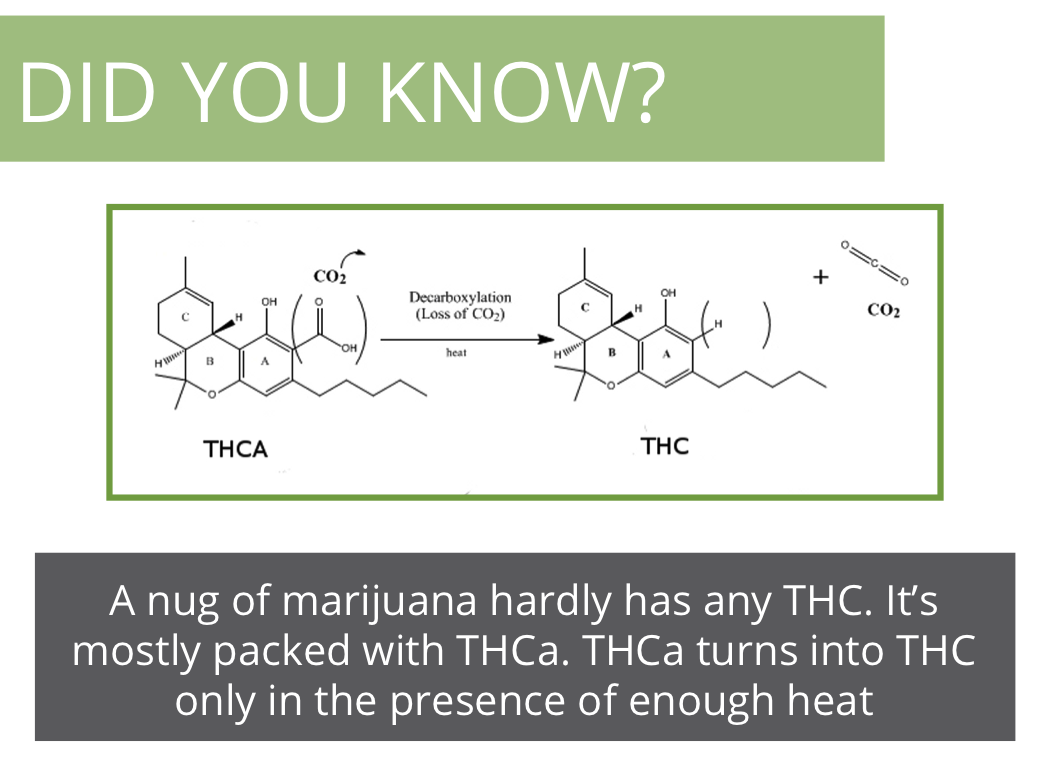 This gives THCa a pH value less than 7, meaning it can accept an electron or donate a proton in chemical reactions with other substances — this is why acids tend to be corrosive.

THC in its acidic form doesn’t react in the same way with the body’s endocannabinoid system, the system of neurotransmitter chemicals and nerve receptors that governs mood, appetite, memory and regulates a host of crucial physiological functions.

So, in preparing edibles, you need to heat raw cannabis in butter, coconut oil or just roast it in the oven at 230 degrees F for a couple of hours. The heat breaks off the carboxyl groups from the THCa molecules and allows the fat-soluble THC to leach into the oil. Cannabidiol (CBD), the potent, non-psychoactive cannabinoid in marijuana, is subject to a similar process.

When smoking or vaping, the heat from the element or flame does the decarboxylation as or immediately before inhalation, but you need this extra step pre-consumption when consuming edibles.

Unlike with smoke or vapor, edible cannabis doesn’t absorb much into your mucous membranes. It hits your stomach, where, unfortunately, some of the most potent cannabinoids get destroyed by stomach acid.

But there’s certainly enough left when that brownie slurry hits your liver — that’s where the cannabinoids and other cannabis components enter your bloodstream.

“Absorption is slower when cannabinoids are ingested, with lower, more-delayed peak (bloodstream) THC concentrations,” according to a study in the journal Chemistry and Biodiversity. “Dose, route of administration, vehicle, and physiological factors such as absorption and rates of metabolism and excretion can influence drug concentrations in circulation.”

In general, subjects across multiple studies who ate cannabis rather than inhaled its smoke or vapor had lower blood concentrations.

“Following oral ingestion, psychotropic effects set in with a delay of 30 to 90 minutes, reach their maximum after 2 to 3 hours, and last for about 4 to 12 hours, depending on dose and specific effect,” according to the Journal of Cannabis Therapeutics.

Furthermore, the blood concentrations of THC and its metabolites (the chemicals that result from the breakdown of THC) were wildly different from person to person in the study, as was how they rated their high– a perfect exemplar of the need for personalized medicine in cannabis.

According to a study in Analytical Toxicology, THC and metabolite concentrations were not correlated with the cannabis dose, meaning individual body chemistry seems to have a lot to do with how we process cannabis in general and edibles specifically.

“Correlations between blood cannabinoids and cognitive performance measures, and between oral fluid and all pharmacodynamic outcomes were either non-significant or not orderly by dose,” the study states.

The THC, CBD and other components of edible cannabis that survive the bath in stomach acid get absorbed into the bloodstream through the small intestine. The blood vessels surrounding your small intestine lead to the liver, which is your chief organ for metabolizing all sorts of substances.

We’re angling our Magic School bus into the human liver now, which will do its best to break down the cannabinoids from our pot brownie using enzymes.

The liver produces a large arsenal of enzymes, which are proteins folded in such a way as to attract and break apart or otherwise process all the chemicals that enter your body.

With CBD and THC, a specific liver enzyme, cytochrome P450, adds some oxygen to the molecules. CBD and THC are fat-soluble, and thus difficult for the kidneys to process. The addition of those extra atoms make them dissolve in water and able to be excreted by the urine in the form of THC-COOH and 11-OH-THC. The latter metabolite is the focus of drug tests you have to take for work, court or state supervision.

Did you know that you  could have a genetic variant that makes you 30% less effective at breaking down CBD and/or THC? This can cause you to get higher than the average person and potentially remain intoxicated for up to three days. To find out if you have such a genetic variant, you can get a cannabis DNA test.

Interestingly, according to the CBD Project, a non-profit started by science journalists to document and demystify research and practice in clinical marijuana, states that 11-OH-THC is itself an even more potent psychoactive chemical than plain old THC, meaning that your body’s metabolism can make your weed more potent.

So even though you lose a lot of THC and CBD in edibles to stomach acid, those metabolites that make it through the liver are more potent. When smoking, THC bypasses the liver, meaning much of it will hit your brain in pure form before a brain enzyme carries it back into the bloodstream to get processed by the liver into THC-COOH and 11-OH-THC.

As mentioned in our first cannabis pharmacokinetics article on how your body breaks down and removes smoked weed, a specific brain enzyme called fatty acid amide hydrolase (FAAH) lives in your neurons.

When THC and CBD (as well as your naturally produced endocannabinoid neurotransmitters) lock into the endocannabinoid receptors on nerve and brain cell membranes, it kicks off a cascade of physiological responses comprising the cannabis high.

To keep the system balanced (an equilibrium known as homeostasis), your neurons release more FAAH to pull the cannabinoid transmitter molecule out of the receptor by locking onto it and transferring it to the bloodstream where it will be filtered out by the kidneys and excreted.

Travel the human body on a weed puff: Cannabis Pharmacokinetics Pt. I

The first installment in a two-part-series on Cannabis Pharmacokinetics — the science of how cannabis interacts with your body following ingestion. [Read More…]