Perhaps the most common question on the top of every new employee’s mind is: how long does weed stay in your system?. Unlike cocaine and alcohol, which flush from your system in hours or a day, cannabis lingers in your system for days after use, long after any high has dissipated.

Cannabis is a unique plant in many ways, but its tendency to linger in body tissues and show up in a marijuana drug test for up to 30 days after use poses a particularly thorny challenge for employers, court officials, potential employees and people on parole and probation.

Despite weak evidence that pre-employment drug screening has any correlation with work performance, 70 percent of companies with more than 2,500 employees require a marijuana drug test, and pre-screening is part of the deal for 40 percent of jobs in the U.S., according to a Vox article on the subject.

Remember that employers in recreational states like California can still discriminate against you for your cannabis use.

Furthermore, nearly every probation and parole regimen in the country requires convicts to “piss clean” through the duration of their sentences.

“The science of drug detection in urine can only provide reasonable best estimates,” according to the National Drug Court Institute’s 2006 meta analysis of urinalysis studies. “The law is not always black and white; neither is science. Therefore, precise “yes/no” answers or exact detection windows are generally not attainable.”

Why does weed stay in your system for so long?

To test for marijuana use, clinicians look at levels of delta-9 tetrahydrocannabinol (THC) metabolites in the urine. The body breaks THC, weed’s most potent psychoactive ingredient, down into a metabolite called THC-COOH. (Metabolite is just a word that describes the end molecule after the body processes a substance and excretes it.) It is THC-COOH that any marijuana drug test screens for. 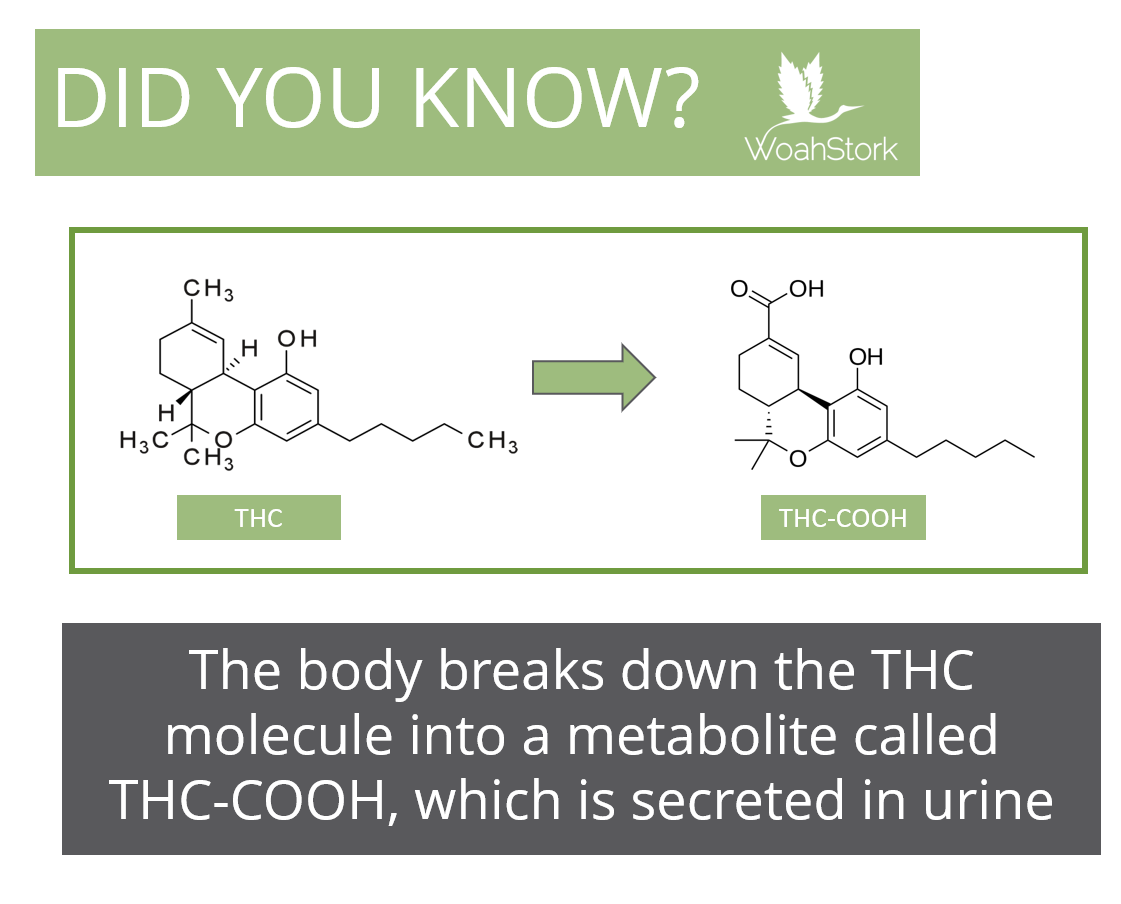 Pot metabolites stay in your system for so long because they are fat soluble. While other drug metabolites get flushed through your urinary and gastrointestinal system fairly quickly, THC dissolves into your fat cells, and its metabolites are flushed much more slowly. This means authorities — whether courts or employers — can detect pot metabolites up to 30 days after your last toke.

Various factors, such as dose, method of administration (smoking vs. edibles, etc.), individual metabolism, body fat percentage and frequency of use can cause wide variations in the length of the detection window for any marijuana drug test.

How long does weed stay in your urine?

Though 30 days is the accepted maximum length of time that THC is detectable in your urine, the vast majority of even heavy users can pass a urine test in roughly two weeks.

According to the Netherlands Association for the Legalization of Marijuana, most casual users will pass a urine test after about three days, while most heavy users can pass a pee test after 15 days.

The organizations recommends a regimen of fasting and drinking tons of water, in addition to laying off the pipe, leading up to a urine test to help you pass.

How long does weed stay in your bloodstream?

Marijuana metabolites clear out of your bloodstream faster than they clear out of your urine. Blood tests are currently used by law enforcement as the most accurate predictor of whether or not someone arrested was driving high, but blood tests pose problems, too.

“Chronic frequent smokers accrue a high body burden of THC that is released and excreted over days or weeks of sustained abstinence, resulting in low residual THC concentrations,” according to a 2016 study in Clinical Chemistry. “In occasional smokers, blood THC is detected only for a median 4 hours after smoking a single 54-mg THC cigarette.”

This complicates cops’ jobs in that there’s no way to determine from tested blood concentrations exactly how high or impaired a suspect was when he or she was driving.

Police agencies are experimenting with saliva swabs, and a California company in summer of 2018 announced a pre-production model of a new marijuana breathalyzer device that measures THC in breath vapor.

How long does weed stay in your hair?

Hair follicle tests are good for figuring out whether someone is a chronic, heavy user of the chronic, but it’s virtually useless to test for casual consumption.

If you smoke infrequently, it takes up to a week for enough THC metabolites to collect in your hair to be detectable. If you’re a heavy smoker, however, hair tests can detect cannabis in your system for as long as three months after your last use.

Hair tests are expensive and cumbersome, however, so the U.S. court system and most U.S. firms don’t use them.

Can you shorten the amount of time cannabis stays in your system?

Naturally, many cannabis users will try and accelerate the process by “detoxing”. While there are no known methods to decrease the amount of time that weed stays in your system, there are some theoretical strategies one could employ in order to pass a drug test without refraining from smoking weed for so long. Try out this regimen for 3 days and you should be able to pass a urine test within 3 days of smoking:

As for hair tests, you could technically get a very short hair cut or bleach your hair and then re-dye it. These are drastic measures for sure; they depend on damaging (or deleting) your hair beyond the point of recognition such that the THC-COOH would no longer be detectable.

How Long Does Weed Stay in Your System (References):

“How Long Does Weed Stay in the Bloodstream?”

The Netherlands Association for the Legalization of Cannabis