The notion of trying to lose weight with cannabis feels a bit like an oxymoron. The fact that weed gives you the munchies is one of the oldest pieces of common-sense marijuana lore. And, in the short term, science agrees that pot produces a healthy appetite. That’s one reason it’s only and oldest FDA-approved clinical use in the U.S. is to stimulate appetite in chemotherapy and AIDS patients in the Marinol form, a synthetic tetrahydrocannabinol (THC).

Most of us tend to overeat during the holidays. For some, toking up before a holiday meal is a tradition that helps make that honey ham, latkes, or Christmas cookies that much tastier, even if you have to pretend you’re not stoned for grandma’s sake. So, this holiday season we hope to unveil the ways in which you can lose weight with cannabis….not just gain from all that munchies-fueled overeating.

While some may jest that you can lose weight with cannabis (see Lil Wayne insisting his “arm workout” is from lifting his blunt to his lips over and over in the above gif), it’s actually possible! However, first you should have a thorough understanding of how appetite works and how cannabis interacts with your body to control appetite.

Why does pot make you hungry? 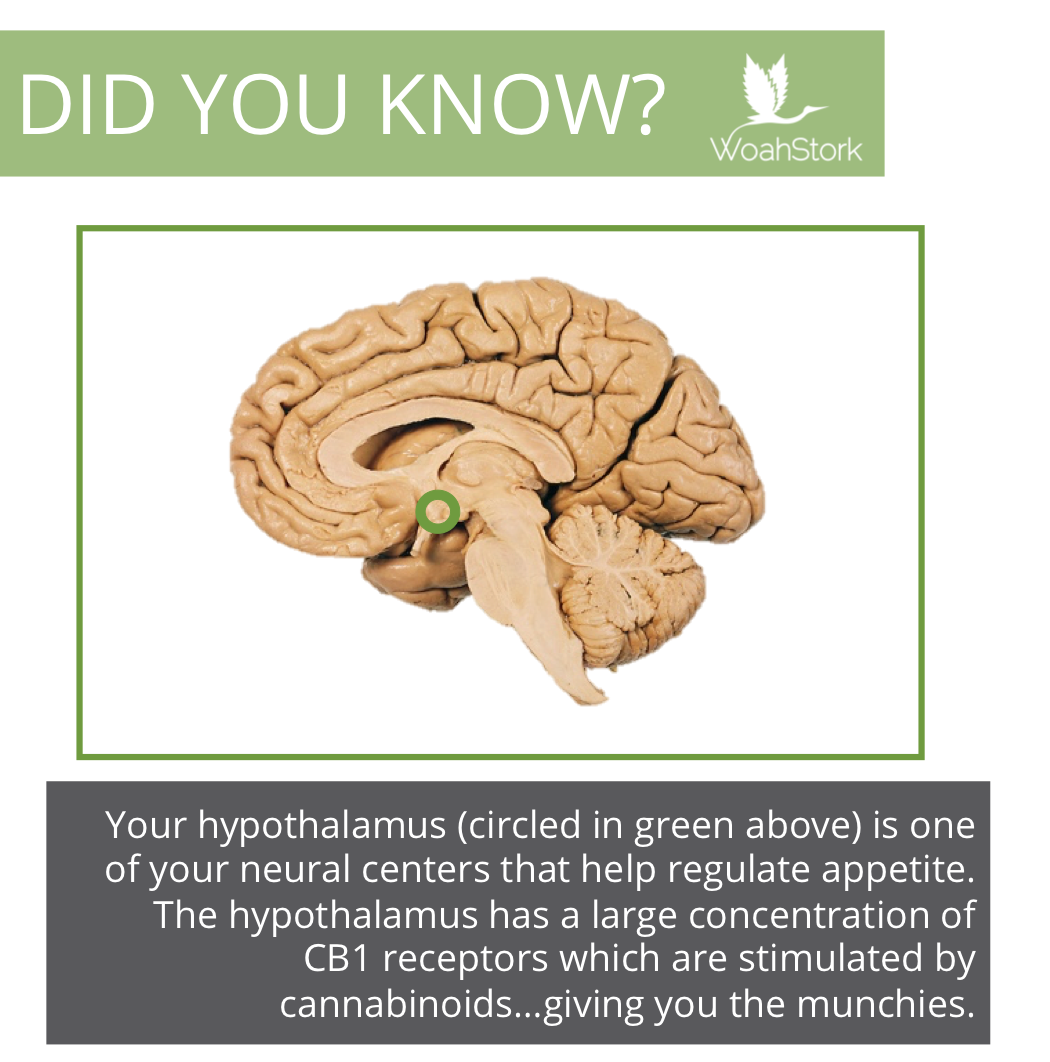 So, when enough cannabinoid receptors, namely a type called “CB1” receptors, activate, your brain triggers the release of hormones (mainly from your hypothalamus) that make you reach for the tub of Ben and Jerry’s, despite your better judgement.

Get a ton more details in our “Why Does Weed Give You the Munchies” article.

But, counterintuitively, studies over and over again have shown that frequent marijuana users actually are less likely to be obese than the general population. In some cases, cannabis use may help you lose weight, despite causing “acute hyperphagia,” which is scientists’ ten-dollar term for “the munchies.”

“Current data indicate that while low-weight individuals are likely to gain weight with acute marijuana use, individuals in community samples display an inverse relationship between marijuana use and body mass index,” according to a 2014 study in Innovations in Clinical Neuroscience.  “While purely speculative, perhaps marijuana truly has a broad-spectrum regulatory effect with regard to body weight—increasing weight in those who are underweight, but not in those who are normal or overweight.”

Of course, the researchers also said the people in the multiple longitudinal studies they analyzed were also more likely to use tobacco and other drugs, which makes it difficult to tease apart the real relationship between cannabis and weight regulation.

How does cannabis regulate weight gain and weight loss?

But other studies in rodents have also shown that animals administered chronic doses of the Chronic also tended to lose weight, or at least, gain it more slowly than a control group. A 2015 PLOS One study posits the effect is due to THC, the main psychoactive cannabinoid in marijuana, and its changes to the gut microbiome — the community of billions of beneficial bacteria in the stomach and intestines that help us digest and metabolize food.

Part of the way your body regulates energy and uses the food you eat involves insulin, which regulates blood sugar levels. Type 2 diabetes — the kind that goes hand-in-hand with obesity — has a lot to do with insulin resistance, which means a diabetic person’s body has to have extra insulin to maintain healthy blood sugar levels.

So, high blood levels of insulin, even if you have fasted for a certain period, are indications of diabetes and increased risk of obesity.

A 2013 study of nearly 5,000 men published in the American Journal of Medicine showed that marijuana users had overall smaller waist sizes and a 17 percent lower level of fasting insulin than non-users, as well as significantly better blood levels for other diabetes markers.

Some research has shown that Tetrahydrocannabivarin (THCv) , another cannabinoid found in the cannabis plant, could be responsible for one of reasons why people can lose weight with cannabis.When administered to rodents, THCv induced weight loss and prevented a “rebound” after the administration. The study also showed that high THCv-cannabis extracts did not have the same effect.The authors suggest that this could be because the THC counteracted the effects of THC.

In summary, it seems as though THC can help with preventing weight gain and THCv can help with weight loss. If you’re looking for strains high in THCv to help with your weight loss journey, be sure to order high-THCv-strains on WoahStork.

“The Impact of Marijuana Use on Glucose, Insulin, and Insulin Resistance among US Adults”
Elizabeth A. Penner et al

The American Journal of Medicine

Marijuana and Body Weight”
Randy A. Sansone and Lori A. Sansone