Losing your memory after smoking weed — a phenomenon we dubbed “marijuana induced memory loss” is quite common. Below, we showcase 6 tips to decrease that loss so you’re not acting like you have amnesia after smoking your next joint.

The Summary (tl;dr): Eat chocolate and peanuts for your munchies, project your memories into space, take B12 and fish oil, exercise, choose low-THC strains and add CBD to your joints and dabs.

Short-term memory loss is one of the most frustrating negatives associated with smoking marijuana. Not only does it make you feel incompetent in your communication attempts, but also nothing gives away that you’re high more than the classic “wait…what was I just saying?”.

My explanation in college for the reason behind why our memory fails us when we’re high was that we’re living too “in the moment” for our brains to be bothered with encoding what’s going on. While I still stand by that general philosophy, I now also believe there are ways to effectively retain your short and long-term memory while high. 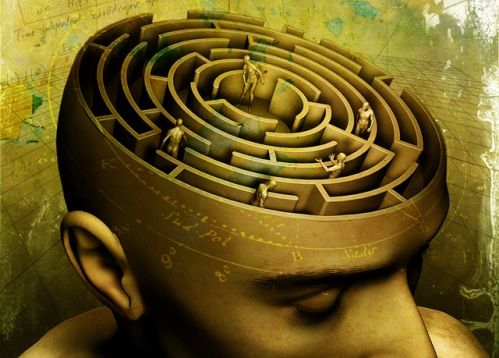 I’ve been obsessively developing a theory that uses the following logic: An organism’s primary objective is to stay alive and reproduce; In order to do so, an organism must acquire resources and mates while avoiding that which will lead to its demise; This requires moving about your environment, purposefully; In order to move purposefully, as opposed to randomly, the organism must have a memory of where it has been and what was found there.

Using such logic, it would follow that the earliest neural architectures should have been dedicated to encoding spatial information to support purposeful navigation. Thus, an organisms’ most advanced cognitive feat should be that of encoding space; it would be the system most subject to evolution’s relentless force towards achieving maximal facility.

I argue that if we piggyback on this spatial system by using it as scaffolding for remembering non-spatial things, we can take advantage of its evolutionary prowess and increase our memory! This is almost certainly why the Method of Loci, an ancient mnemonic technique, provides people with an almost 7x memory boost.

The Method of Loci encourages you to take a list of to-be-remembered items, let’s say a grocery list, and, with your eyes closed, place each of the items at locations of your choosing as you walk about a familiar environment (e.g. your childhood home) in your imagination. When the time comes to try and remember those items, all you need to do is imagine yourself back in that environment where you can observe all the items you previously placed. See the gif below for an example of using the Method of Loci in Virtual Reality.

The Method of Loci, also known as the memory palace technique, has been popularized most recently by Joshua Foer in his book “Moonwalking with Einstein”, where he recounts his ascent to becoming the national memory champion within a year by using this strategy and in BBC’s Sherlock where a character exhibits impressive, and exclusive, memory feats. A great deal of my own research highlights just how incredible this effect is. After years of acquainting myself with this strategy, I’ve come to realize that it can be adapted so as to counteract marijuana induced memory loss.

Imagine you’re gearing up to share your top 5 favorite movies with your smoke circle. Plot it out spatially before you start to speak so that when you tell the story, you can walk through a familiar environment (which you won’t forget) and tell the story that way. If I were doing it, I’d walk into my house and place a trench coat on the coat rack (The Matrix); I’d the walk to the dinner table and construct a huge fountain (The Fountain); turning to go up the stairs, I’d place a model of the sun (Eternal Sunshine of The Spotless Mind); Getting to my bedroom, I’d throw down a huge bottle of vanilla extract (Vanilla Sky); finally getting to my bathroom, I’d hang a huge spaceship from the ceiling (Arrival).

Note how not only can you remember the 5 items and their relations with ease, but you’ll also preserve the temporal order! The more fantastical and interesting you make your object-space associations, the better you’ll remember.

The way your brain makes memories is by strengthening the connections across neurons that encode your percepts. Let’s say you see a red cube. Let’s pretend there is a neuron that represents red and a neuron that represents a cube1. Thus, whenever you see a red cube, both of those neurons would be active at the same time. There is a classic principle in neuroscience called “Hebbian Learning”, which essentially says “neurons that fire together, wire together”. Thus, the red and cube neurons would end up wiring themselves together such that any time you see red, you might be triggered to also think of cube…bringing to mind the memory of seeing a red cube. Apply that to whole scenes, consisting of people, actions, and objects and you have a basic understanding of how your brain encodes events in your life.

Now, how that wiring happens is by way of a complicated neurochemical process called “myelination”. Basically, the connections across neurons get insulated with fat so that the signal conducts faster and more efficiently.

Certain foods are high in the components that make up myelin. Choline is a huge player. Foods high in choline include eggs, peanuts, sesame and flax seeds, oats, and fatty cuts of meat. Essential fatty acids from fish also produce EPA and DHA (Omega-3 fatty acids) which your body uses to produce myelin. Lecithin has both fatty acids and choline, making it crucial for myelin production. Soybeans, wheat germ, liver, brussel sprouts, shrimp, peanut butter, and chocolate are all great sources of leichten.

A diet that includes these foods encourages memory strength and could be very useful in combatting marijuana induced memory loss.

1 There are not. Redness and cubeness are each composed of millions of neurons firing in specific spatiotemporal patterns.

In case you aren’t able to eat the right foods on a regular basis, a great way to ensure you get enough myelin-producing nutrients to combat marijuana induced memory loss is to take supplements. The supplements listed below have proven to be particularly useful. Brain Derived Neutrophic Factor (BDNF) is known for helping to support the survival of existing neurons, and encourage the growth and differentiation of new neurons and synapses. The expression of BDNF increases with exercise. We theorized in a previous article that the lack of exercise within the cannabis community could be the driving force behind the negative impacts of cannabis use on intelligence. By fightining the desire to sit on the couch with your cannabis and, instead, going for a walk everytime you smoke, you could combat the majority of the negatives associated with marijuana.

Furthermore, regular exercise actually upregulates the hippocampus — your brain’s memory encoding center. By staying active, users stand a chance to have even better memory than their non-user peers!

Strains from our Energize Activity Group will give you the energy to get up and stay active! Cannabis doesn’t always need to make you lazy…

A – Go For Strains High In The Terpene Pinene

Pinene has long been associated with memory enhancement. Fortunately, it’s one of the hundred of terpenes found in the cannabis plant. Thereby, choosing strains with a lot of pinene can help offset the memory loss induced by marijuana. We recommend Jack Herer and Super Silver Haze when searching for strains high in pinene.

B – Tend towards low-THC strains

Growers have long concentrated on maximizing THC content in their strains. Makes sense, right? Users want the most high for their buck. However, too much THC can be detrimental. Heavy THC use can result in a decrease in hippocampal volume. We suggest Jack Herer, Hawaiian, and Kali Mist.

Keeping the mind and body active is the best way to combat marijuana induced memory loss and cognitive decline in general. Certain strains can encourage such behavior. We recommend choosing strains from our Energize and Create Activity Groups to keep you physically active and cognitively alert.

Studies have shown that the use of CBD can help to alleviate some of these seemingly worrisome impacts on cognitive capacity—almost negating them. Thus, we make it a regular practice to sprinkle in some CBD to our joints and dabs.

We recommend grinding up about 1 part Cannatonic, ACDC, or Charlotte’s Web to 3 parts your regular strain choice.

Bhang also makes a fantastic CBD isolate that you can mix with your dabs.

Smoking marijuana is one of the most pleasurable experiences in the world. Anything that has the ability to make you say “woah” on a daily basis while helping you combat cancer, PTSD, Chron’s Disease, and countless other diseases, is nothing short of a miracle. However, it would be unwise to consider it “perfect”.

Marijuana induced memory loss is one definitive downside to the drug. However, by following the 6 steps outlined in this guide, you can become a responsible user that respects the wonderment and efficacy of this plant. In so doing, you’ll have increased the positives and decreased the negatives associated with smoking cannabis. Soon, you’ll be on your way to keeping true to the WoahStork Motto: Live life to the highest.

Does Weed Make You Forgetful? The Impact of Cannabis on Memory

We’ve all internalized the stereotype of the lazy, forgetful stoner gorging on junk food while watching cartoons, but how much of this image is real, and how much is anti-cannabis propaganda? Does weed make you forgetful? Our scientific review investigates the impact [Read More…]