No, don’t smoke weed if you’re pregnant or breastfeeding.

If you’re still smoking and you just found out you’re pregnant, stop. Lots of smart people — like most obstetricians and pediatricians — agree that it isn’t worth the risk to your developing fetus.

That’s the short answer. The background is more nuanced. There aren’t a ton of data about weed smoking and pregnancy because it’s unethical to ask pregnant women to use marijuana to compare them with those who abstain.

But what studies exist show ingesting marijuana while pregnant can lead to early delivery and lower birth weight, as well as learning and behavioral impairments for your kid later in life. These studies show the risk exists even when accounting for use of tobacco or other drugs and alcohol.

See our related article on whether or not you should use cannabis when trying to get pregnant.

But if you’re prescribed marijuana by a doctor for a serious medical condition, talk to your doctor as soon as possible about what you should do. As with other drugs that may potentially harm a fetus or complicate pregnancy for the mother, your doctor should weigh the benefits against the risks and tell you exactly what you should do. 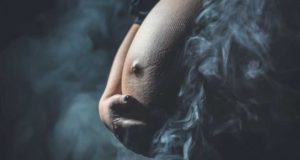 For example, if you’re a case in which marijuana or a derivative is prescribed for a seizure disorder, an increase in seizures caused by stopping medication may pose more risk to the baby than cannabis, itself.

Still, such situations are rare, and those decisions need to be made in consultation with a physician.

What do doctors say about smoking weed while pregnant?

“Marijuana is one of the most widely used substances during pregnancy in the United States,” according to the AAP study. “Social media is used to tout the use of marijuana for severe nausea associated with pregnancy. Emerging data on the ability of cannabinoids to cross the placenta and affect the development of the fetus raise concerns about both pregnancy outcomes and long-term consequences for the infant or child.”

A study from the 1990s showed regular cannabis use by expectant mothers (several times per week) put their kids significantly behind those of non-pot-smoking moms in learning and behavior measures recorded when the children were three years old.

Other studies have shown significantly lower birth weight and fetal size caused by maternal cannabis use, and those weed-smoking mothers tended to deliver almost a week earlier than their non-cannabis-using counterparts.

Not only does ingesting marijuana cause problems during pregnancy, but it can also keep you from getting pregnant at all.

Does Marijuana Help with Morning Sickness?

Lots of anecdotes around the internet say expectant mothers with severe nausea can find relief by ingesting cannabis.

Check out our article on how cannabis can be used to treat nausea, in general.

This may be true, but according to the AAP, there’s no scientific evidence on how effective this is, and several relatively safe and functional anti-morning sickness remedies are already available.

Once again, it comes down to a risk-benefit analysis. It’s safe to say most physicians would direct you to an approved treatment like vitamin B6 or doxylamine — especially in the absence of any clinical studies about cannabis for pregnancy-related nausea and vomiting.

What if I’m addicted to a ‘hard’ drug and use marijuana instead while I’m pregnant?

In the substance abuse treatment community, there’s a lot of debate about weaning opioid-, methamphetamine- or other drug-addicted people off those “hard” drugs while substituting marijuana.

This strategy is called “harm reduction”. Other examples include efforts to provide users with clean needles to prevent the spread of HIV, or efforts move addicts from heroin to the more controllable methadone.

Research shows many drug-addicted mothers often take the pot substitution approach on their own as a sort of common-sense, folk medicine approach.

If you were to ask a pediatrician whether it was worse for an expectant mother to drink alcohol, take methamphetamines or inject heroin during pregnancy, they would likely say marijuana was the least harmful of the three.

But that doesn’t mean the doctor would recommend it. It’s important to understand that none of these are good options.

If you are pregnant, you should tell your doctor about all the substances you are using or have used since you became pregnant. They are bound by a confidentiality oath. As a result, they can’t get you in trouble with authorities, or even your spouse without exposing themselves to legal action.

Their interest is, by law and professional ethics, in telling you what you need to know to maintain your health and the health of your baby.

Can I smoke weed while breastfeeding?

THC and other active ingredients (e.g. cannabinoids and terpenes) in marijuana are secreted in breast milk. Once again, the rigorous studies of the effects on pot-laced breast milk are few. 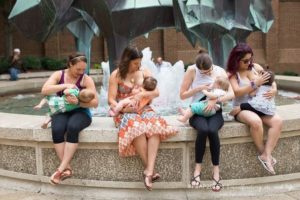 It stands to reason, however, if phytocannabinoids (the cannabinoid chemicals from marijuana, as opposed to the body’s naturally occurring cannabinoids) can harm a fetus, they can harm a nursing infant.

The answer, as it is to most of the questions posed in this article, is simple: Why take the chance?

“Effect Of Marijuana Use In Pregnancy On Fetal Growth”
Elizabeth E. Hatch and Michael B. Bracken
American Journal of Epidemiology

“The association of marijuana use with outcome of pregnancy.”
S Linn, S C Schoenbaum et al

The American Journal of Public Health
1983

“Marijuana use during pregnancy and decreased length of gestation”
P.A. Fried et al