Pinkman Goo, an Indica strain of cannabis developed by Twompson Prater of CaliCropDoc, is, literally, like none other. One look at a nug of Pinkman Goo will leave even the most experienced of cannabis aficionados in a state of amazement;  there is a definitive “goo glob” mixed in the buds.

Have a look for yourself:

Even if Pinkman Goo didn’t have its trademark goo glob, it would still be a marvel to admire; its flower is a rich purple and orange blend with a classic sprinkle of earthy green throughout. The leaves also feature a remarkably deep purple rim. This is mostly due in part to its lineage. Pinkman Goo is a cross between the famous Grandaddy Purple (GDP), Grape Ape, and Northern Lights #5. Both GDP and Grape Ape are known for their deep purple leaves and nugs, which is certainly expressed in Pinkman Goo’s phenotype.

However, it’s not all about aesthetics when it comes to Pinkman Goo’s characteristic color and resin. Lab tests have revealed that samples that include the goo test 4% higher in THC compared to samples that do not include it. Even the team at SC Labs, who conducted the tests, claim that Pinkman Goo is unlike any other strain they’ve come across. That’s saying a lot as they test a great deal of the cannabis sold throughout dispensaries in Southern California. Large-scale growers, including those at Bloom Farms are also quite dumbfounded by the rarity that is Pinkman Goo’s trademark “goo glob” on its nugs.

What Is The “Goo” on Pinkman Goo?

Pinkman Goo’s creator, Twompson Prater, was also baffled by the observation. He hadn’t seen something like this in all his years of growing. However, he has a theory as to how Pinkman Goo achieves its goo glob of resin. First, it should be acknowledged that the predominant driving force responsible for the goo is genetic; Pinkman Goo is so far down the lineage tree that it contains the genetics of so many strains of cannabis giving it a diverse and unique makeup. Second, he thinks that the resin is very similar to that of “sap” from a tree. Maple syrup, the pancake topper we’ve all come to know and love (or main ingredient in the Master Cleanse if you’re a new-age Californian) is the result of a Maple tree’s sap.

Typically sap is a nutrient rich water that is transported throughout a plant by either xylem cells or phloem tubes.  Sap transported by xylem cells are typically bringing nutrients from the roots towards the leaves. It’s a complicated process since the plant needs to work against gravity and leverage cohesion and tension in order to transport the nutrients. There are many things that can disrupt this delicate process including water stress and drastic changes in temperature. Such disruptions could cause the plants to excrete sap and form “goo globs”.

Sap transported by phloem is slightly different. Phloem sap brings sugars from carbohydrate storage locations within the plant to places where the sugar is used. Since the “goo” on Pinkman Goo has been reported to be sweet and sticky, it’s more likely that the goo globs are a result from phloem sap. Phloem sap also plays a role in sending information signals throughout the plant. It also contains a great deal of macromolecules for transportation purposes. Thus, it could be likely that the goo is helping to transport THC around the cannabis plant. This would explain why the goo adds 4% THC to testing results.

Twompson believes that the sap appearing on the nugs is a result of “nighttime photosynthesis”. Photosynthesis can’t actually occur without the presence of sunlight or indoor grow lights, so this is more a term to describe nighttime “respiration”. Twompson discovered a mistake in the feeding automation that may have tricked the plant into thinking it was daytime without the presence of light. He argues that this “nighttime photosynethsis”/ respiration triggers a transport of the sap and since the stomas are closed without the presence of light, it oozes out of the calyx and leaf margins of the plant since it has nowhere else to go. Twompson likens the process to “sweating”.

Scientific research shows that “after acclimating plants to long or short days, it was found that night-time leaf conductance was greater in plants acclimated to short days, and associated with greater leaf starch and nitrate accumulation, both of which may affect night-time guard cell osmotic potential.” This osmotic potential could affect the saps ability to excrete, especially if Pinkman Goo’s genetics are already conducive to “sappage”.

Pinkman Goo’s parents GDP, Grape Ape, and Northern Lights’ tendency to induce relaxation are present throughout the Pinkman Goo experience. Users report a sense of calmness after ingestion and a tendency to drift into a deep slumber within a few hours. The strain is very sweet tasting, partially due to the sweet and stick resin goo that makes it famous.

More information on Pinkman Goo, along with countless hours of video grow guides can be found on Twompson’s company page: Cali Crop Doc. Merry Jane also conducted a fantastic video interview with Twompson and other growers surrounding this mysterious strain.

We hope to soon be able to find a dispensary that carries Pinkman Goo. Be sure to check out WoahStork to find Pinkman Goo in a dispensary near you. Until then, enjoy the eye-candy! 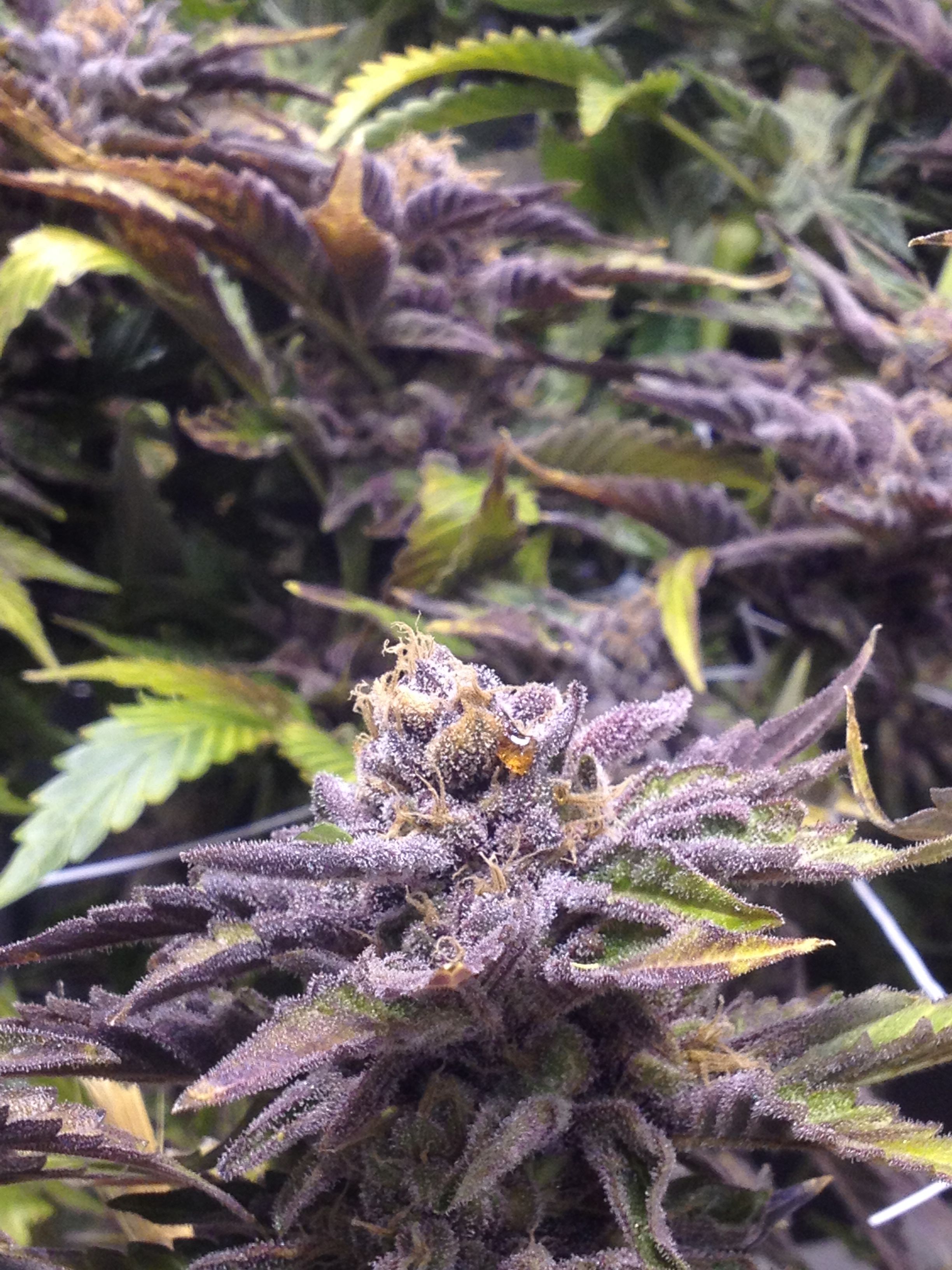 Named for its frosty white trichomes, White Widow reminds us of a snowy Christmas tree. Dating back to the early 1990’s, this strain is a classic hybrid with a sativa/indica ratio of 60/40. This strain won the Cannabis Cup in 1995, so [Read More…]

Sativa vs Indica Strains: Is There Any Truth To The Dichotomy?

How Different Are Sativa vs Indica Strains? There’s no doubt that you have heard that there are major differences between Sativa vs Indica. Is there any truth to this split? Is this diverse plant really that simple? Many say that “Sativas provide a head [Read More…]

What makes the Mango strain so unique? This week’s featured strain is the 100% indica Mango strain. In the era of hybrids, finding a pure indica is a rare occassion indeed! If you ever want to experience what a true indica is [Read More…]