Medical marijuana has a reputation for making its users spacey and forgetful. It’s counter-intuitive, then, that the same substance that leads you to lock your keys in the car or leave your cell phone at Arby’s shows strong promise in the fight to cure the most stubborn and devastating forms of dementia: Alzheimer’s Disease.

But researchers have shown cannabis and its component cannabinoid chemicals have important brain-protecting effects in a variety of human and animal experiments related to dementia.

Alzheimer’s Disease and the incurable, progressive dementia it causes rips families apart. Far more heartbreaking and frightening than watching a loved one’s body disintegrate with age and illness, dementia seems to rob individuals of their personal identity, slowly removing a lifetime of memory and experience until the sufferer can barely speak or move.

Many spend years in a nearly catatonic state, a limbo between death and life that destroys family caretakers’ health, emotional lives and coping abilities, let alone their finances. 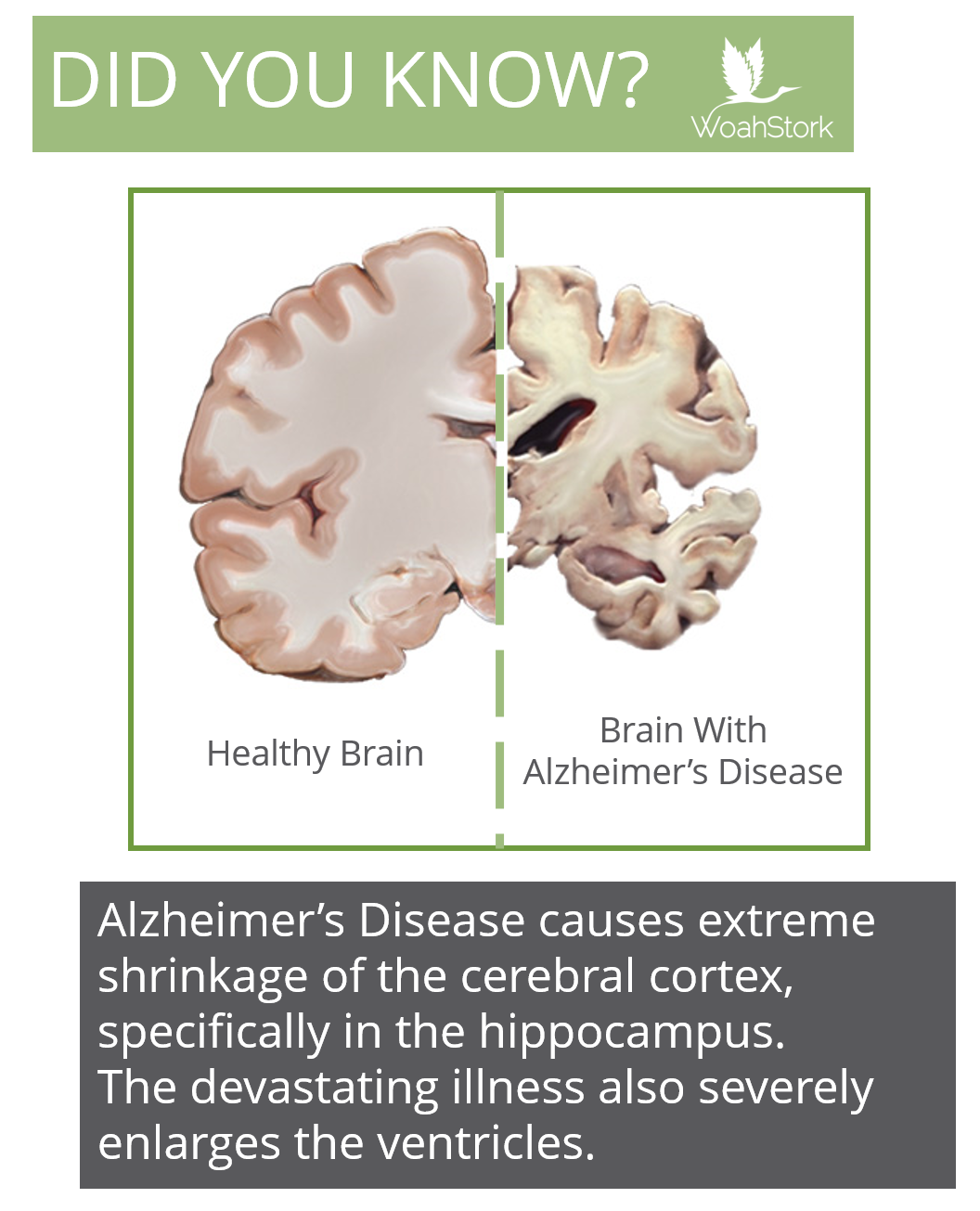 How common is Alzheimer’s?

The growing prevalence of this brain disorder coupled with the demographics of an aging population has researchers scrambling to find a cure for this intractable horror that grips some 5 million Americans — with a new patient diagnosed in the U.S. every 66 seconds. At this rate, the Alzheimer’s Association projects as many as 16 million Americans could be living with Alzheimer’s by 2050.

The root cause of Alzheimer’s disease is one of the trickiest questions facing neurologists. Researchers understand the mechanism by which the effects of Alzheimer’s damage the brain and cause dementia, but haven’t figured out how the dysfunction happens in the first place. Hypotheses range from aluminum exposure to poor diet. Genetics, particularly the gene APOE4, have proven to be a major factor, but faulty DNA alone far from fully explains the disease. Its cause is likely a combination of genetic and environmental factors that researchers may never fully tease apart.

But neurologists have extensively documented the differences between a healthy brains and ones with Alzheimer’s. Their research targets two central culprits in causing dementia: protein tangles that scramble brain synapses to compromise intracellular communication, and plaque accumulation — gunk buildup that eventually strangles brain neurons to death.

The protein tangles are made of Tau protein, which, in a healthy brain, scientists believe acts as a sort of scaffold for the dense arrangement of neurons that allow us to form memories, throw a softball, appreciate a Rhianna jam, or argue theoretical physics.

The plaque that forms is called Beta amyloid (Abeta) plaque. This plaque also appears in small amounts in a healthy brain, increasing slightly with age. In Alzheimer’s, however, the normal flow of cerebrospinal fluid doesn’t clean up this waste product, causing it to crowd out and cut off nutrients to healthy neurons.

No cure exists for Alzheimer’s, and existing medications do little to halt its progression. Components in pot, however, have shown significant promise, despite the reactionary drug laws in the U.S. and West that still hamstring cannabis research.

“Cannabidiol (CBD), a non-psychoactive marijuana component, has been recently proposed as an antioxidant neuroprotective agent in neurodegenerative diseases,” according to a 2006 study in the Journal of Molecular Medicine. “Moreover, it has been shown to rescue (neurons) from toxicity induced by Abeta peptide. However, the molecular mechanism of cannabidiol-induced neuroprotective effect is still unknown.”

In other words, scientists don’t know how CBD works, but it seems to throw a wrench in the works in the chemical process by which plaque kills brain cells.

Activation of the cannabinoid receptors in the brain — the “locks” into which the “keys” of cannabis chemicals fit to cause a physiological response — can also inhibit the formation of those nasty tangles of Tau protein. Cannabinoid receptor activation seems to prevent the Tau protein from combining with too much phosphorus. “Hyperphosphorylation” (too much phosphorous binding) is what makes Tau protein form the dangerous tangles, so the ability for medical marijuana to prevent this over-binding is a huge ally towards fighting Alzheimer’s Disease.

Read our article about how the endocannabinoid system works and how it interacts with medical marijuana.

A 2017 study out of Australia condensed and analyzed existing cannabis research on Alzheimer’s and concluded that not only CBD, but also the psychoactive cannabinoid in pot, tetrahydrocannabinol (THC), could also be effective in treating Alzheimer’s dementia, referred to as “AD” in the study.

“Importantly, CBD also reverses and prevents the development of cognitive deficits in AD rodent models,” according to the analysis from Frontiers in Pharmacology. “Interestingly, combination therapies of CBD and THC… possibly mediate greater therapeutic benefits than either (chemical) alone. The studies provide ‘proof of principle’ that CBD and possibly CBD-THC combinations are valid candidates for novel AD therapies.”

The Top 10 Strains of Cannabis for Beginners

Ashamed Marijuana users are taking to the discrete confession website, Wispr, to share their thoughts on smoking weed and legalization. [Read More…]

Cannabis for Dementia: What You Need to Know

While no study has directly linked cannabis with improving dementia in humans, there is a lot of promise in symptom management and rodent models. [Read More…]