A variety of tiny creatures can infest even the most meticulously groomed cannabis garden. From fungus gnats (which damage the roots) to spider mites (which coat plants in a fine web), experienced pot cultivators strive to exclude such pests from their gardens.

One of the most troublesome infestations that can strike a cannabis garden is nematodes. These small roundworms (also called “eel worms”) can cause considerable damage to plants, including severe stunting and wilting—both of which can significantly reduce yields.

Of the six species of nematodes that are known to infest cannabis plants, five attack the root system. One variety, the root knot nematode, embeds itself in roots and forms giant cells that further expand into galls, which are basically areas of abnormal swelling. 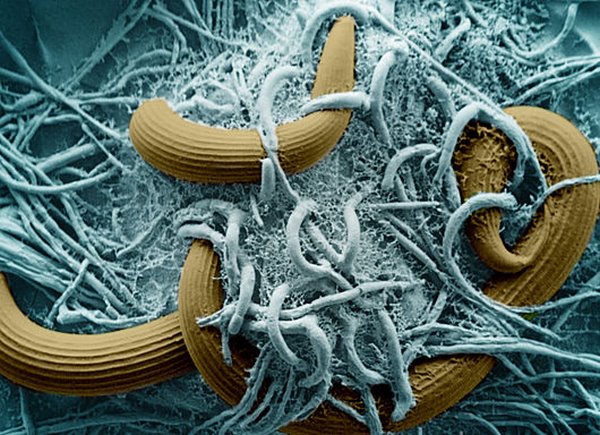 The stem nematode is the one species that lives above the dirt surface and does not infest roots. It does, however, cause swelling—only in the stems, branches, and leaves of the plant. Stem nematodes also cause plants to be chlorotic, meaning that healthy green plant tissue becomes yellow or white due to a lack of chlorophyll.

A troublesome cannabis garden infestation, nematodes that can cause considerable damage to plants, including severe stunting and wilting—both of which reduce yields.

If not dealt with in a timely manner, this type of nematode can cause stems to twist and distort because of how it shortens the internodes between branches. The bad news for commercial growers: This results in stunted growth and reduced yields.

The chemical discovered, myclobutanil, is better known as the brand Eagle 20. While approved by many government bodies for human ingestion (eating), inhalation of this fungicide is a very different story. This is because, when heated sufficiently (such as when smoked), myclobutanil breaks down into a very dangerous and infamous poison: Hydrogen cyanide. Cannabis gardeners wishing to not only avoid pests like nematodes, but also to prevent poisoning patients with cyanide, obviously must seek alternatives to conventional fungicides that, when smoked, are blatantly toxic. One new alternative is PathogenZERO from California’s CaliCropDoc.

PathogenZERO is a broad-spectrum fungicide/pesticide solution that is formulated from natural ingredients and certified organic. This product can protect a cannabis garden against more than 150 different pathogens, including pests such as fungus gnats and nematodes and common diseases like powdery mildew and gray mold (bud rot).

Because it is organic and fully biodegradable, the application of PathogenZERO involves no masks or hazmat suits. It is safe for the environment and all parties in the cannabis supply chain. Gardeners can ethically use it with reckless abandon to achieve the goal of optimized yields and potency.

How To Get Rid of Mold In Your Cannabis Grow

According to author J. M. McPartland, there are at least 88 species of fungi that are known to grow on the Cannabis plant. The most significant and well known of these is the gray mold, caused by the fungus B. cinerea. Like [Read More…]

10 Athletes Who Smoke Weed: The Best of The Best

Athletes who smoke weed?! Talk about breaking the stoner stereotype! The public always reveres athletes for their incredible talent, work ethic, and stand-up behavior as role models for America (despite more than a few bad apples recently). The general public has always [Read More…]