Alpha pinene is one of a pair of similar terpenes (the other is its twin, Beta pinene) present in marijuana which add to its distinctive odor and flavor. Pinenes seem to work in concert with other chemicals in cannabis sativa to moderate the plant’s effect on the human body. 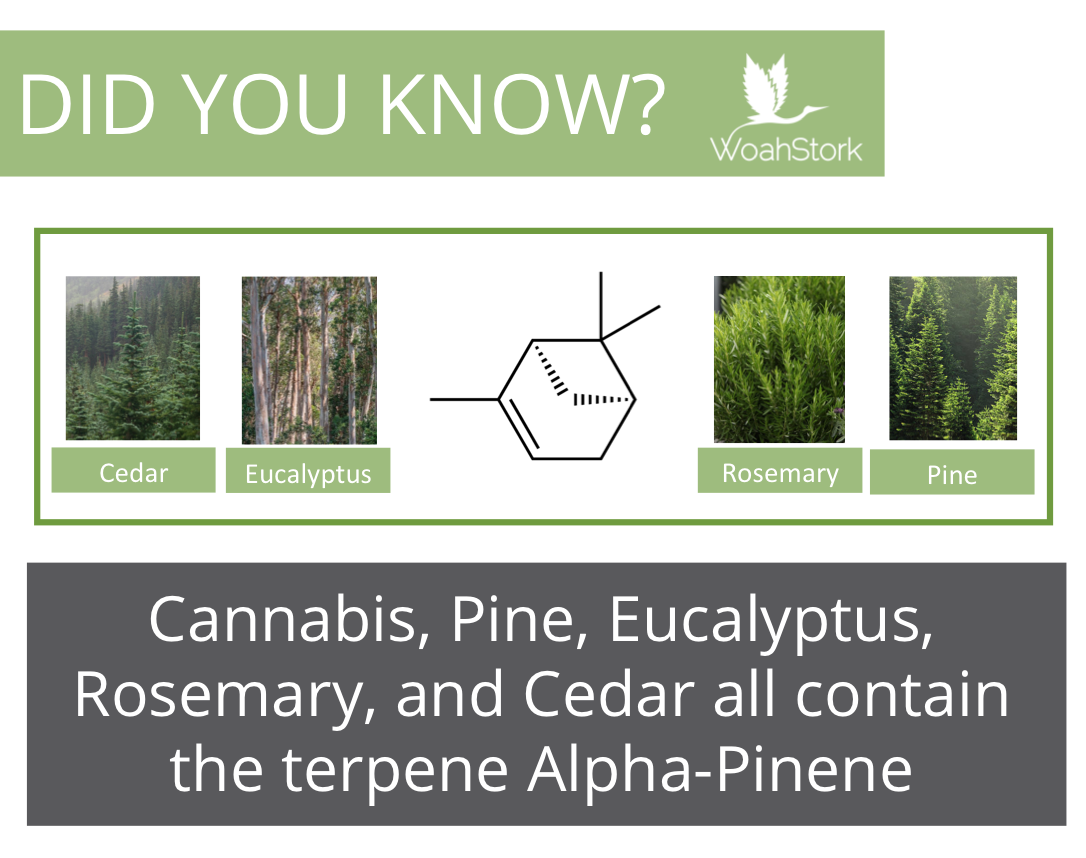 Alpha pinene, along with its twin Beta pinene, is common in turpentine, which is distilled from pine trees. Turpentine has been used for thousands of years as a paint solvent, detergent and medicine. Alpha Pinene is also used in tiny quantities as a flavoring agent in food.

Turpentine — which contains several other terpenes — is poisonous if ingested or inhaled as vapor, though it was used this way medicinally in the past. It’s only current medical use is as a pain-relieving joint salve for rheumatoid arthritis patients. Terpenes in their pure form also have an antimicrobial effect.

The concentrations of pinene in whole marijuana — as in rosemary or other plants — are so low they are benign.

We know a lot about the effects of concentrated pinenes in the form of turpentine because researchers have studied the substance in industrial workers from a safety and toxicology angle. By testing metabolites in the urine of, for example, sawmill workers, researchers have been able to partially reverse-engineer the process by which the body breaks down pinenes.

Scientists know little about how Alpha pinene works in synergy with Delta-9 tetrahydrocannabinol (THC) and cannabidiol (CBD) — the two most potent and most-scrutinized chemicals in cannabis. But, there is evidence the so-called “entourage effect” of Alpha pinene and the other terpenes in marijuana modify the effect of THC and CBD in important ways.

Alpha pinene, on a chemical level, is made of hydrogen and carbon. It’s structured in such a way that the shape of the molecule is a mirror image of its twin Beta pinene. The two are found in similar plants and have similar effects.

“Alpha Pinene” (a collection of toxicology studies related to the chemical)

About Adam Townsend 51 Articles
Adam Maxwell Townsend has been a journalist for 15 years. His reporting has covered science, technology and medicine. Currently, he edits and writes medical and pharmaceutical articles for consumer websites, including WoahStork.

Alpha Pinene vs. Beta Pinene: How These Twin Pinenes Differ

What Are Pinenes? Imagine it’s Christmas morning, You tear open your first present from Santa to find an ounce of fresh, pharmaceutical-grade cannabis. You take a deep breath, and the aroma of the bud mingles with the smell of the cut Douglas [Read More…]

Oregano, cinnamon, black pepper and marijuana are all pungent, and they all have at least one thing in common: a healthy dollop of an intriguing little molecule called Beta Caryophyllene. Beta Caryophyllene is an aromatic molecule that adds to the distinct smell [Read More…]