Linalool (pronounced “li-nal-oh-awl”) is one of a dozen or so important ancillary chemicals in marijuana called terpenes — these are the substances that give bud its distinctive odor and flavor.

Linalool, which isn’t quite as concentrated in weed as other terpenes like myrcene, has a floral scent with spicy notes. It’s also found in more than 200 species of plants and fruits. These include mints, scented herbs, laurels, cinnamon, rosewood, citrus fruits, birch trees, and other plants, from tropical to temperate climates. Some mushrooms even contain linalool. 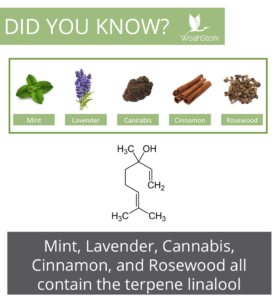 Because of its spicy floral scent, this terpene is used commercially as a food flavoring, but also in scented personal care products.

Unfortunately, linalool got a bad reputation after carbonated water manufacturer La Croix was found to have linalool in their beverages. Given that linalool is naturally expressed in hundred of plants, this represents a gross misunderstanding of “chemicals” by the public. 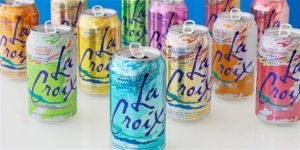 Linalool also has properties that keep insects away — manufacturers put it in candles and sprays that are supposed to deter mosquitoes and other pests. Public health researchers have also tested concentrated linalool as a way to kill mosquito larvae in standing water. A study showed it wasn’t quite as effective as synthetic mosquito killers, but it was preferable because it’s far less toxic. It’s been studied as a way to eradicate mosquito larvae during outbreaks of West Nile virus.

This terpene in conjunction with another chemical is also effective for getting rid of fleas on cats, dogs and other animals.

What are the medical uses of linalool?

Linalool also has some medical uses, usually as part of essential oils. A major component in bergamot essential oil, it helps kill brain cancer cells, at least, in petri dishes.

As part of lavender oil, inhaled linalool can help reduce the urinary pain and discomfort that comes with catheter removal. It also helps cells in rodents heal after nicotine exposure.

A 2002 study in the journal Phytomedicine showed that while linalool has some anti-inflammatory effects on its own, it really shines as a “pro drug,” meaning that it helps other anti-inflammatory agents in essential oils work to counter pain and inflammation more effectively.

This fact is especially interesting from a marijuana research angle. One of the least understood and most potentially valuable therapeutic effects of marijuana is called the “entourage effect.” This is the phenomenon by which the hundreds of different chemicals in whole bud temper one another’s physiological effects in humans.

Delta-9 tetrahydrocannabinol (THC) and cannabidiol (CBD) are the two main active ingredients in cannabis. Researchers have developed a number of different drugs from these two chemicals, including several drugs (e.g. Sativex, Marinol, and Epidiolex) approved for prescription by the U.S. Food and Drug Administration. The terpenes in whole marijuana, however, somehow interact to make the effects more beneficial for some and help reduce side effects. This entourage effect continues to be a target of intense scientific interest.

“The tested doses … were safe, with no motor impairment, and show clear antinociceptive (pain-relieving) and anticonvulsant potential,” states a 2017 study in Pharmaceutical Biology “Future investigations with this monoterpene may lead to the development of a new molecule with even higher potency and selectivity.”

Limonene is one of the most potent aromatic chemicals in marijuana, though it’s mostly known as a major component of oranges, lemons and other citrus fruits. Limonene is part of a class of molecules in the cannabis plant called terpenes, which give [Read More…] [Read More…]

Beta Pinene Beta pinene is one of a pair of similar terpenes (the other is its twin, Alpha pinene) present in marijuana which add to its distinctive odor and flavor. Pinenes seem to work in concert with other chemicals in cannabis sativa [Read More…] [Read More…]