In this week’s Weekly Dose of Woah, we invite you to take a look at this image: You can probably guess the reveal: this is a static image; all the motion you are seeing is illusory. Try focusing as much as possible on one spot. The movement should stop. The illusion really comes to life as your eyes scan the image.

Don’t believe us? Look at the same image, but slightly smaller:

Did the illusion go away or at least decrease?

What about this image? 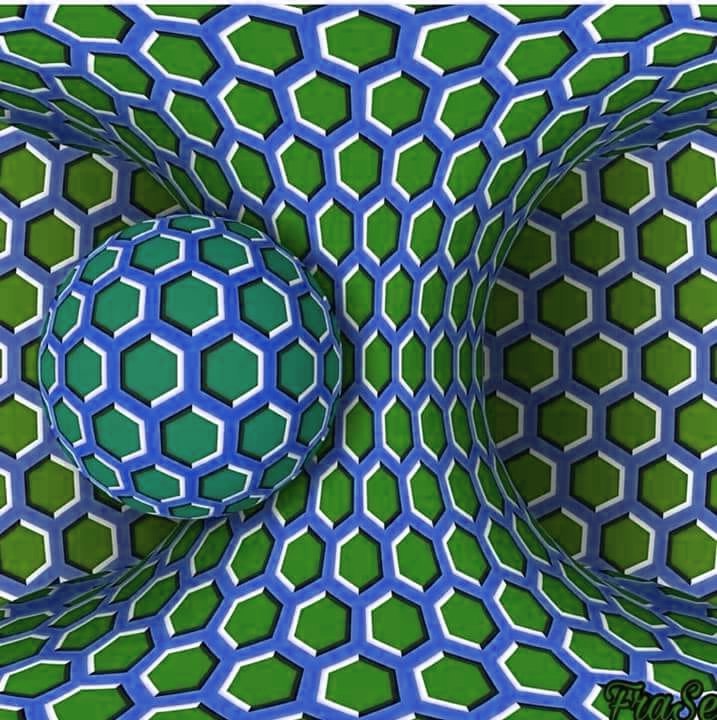 No motion, right? Or, at least, much slower?

While the neuroscience jury is out on exactly how this illusion works, it seems to be taking advantage of the visual processing stream. Visual information that comes in through the eyes follows a hierarchy chain of processing in the brain. Moving from Visual Cortex 1 (V1) to Visual Cortex 6 (V6), the information contained in the image gets processed more and more by your brain. Starting with edge detection (noticing outlines of objects), through to color, and eventually motion. While a full understanding of visual processing is beyond the scope of this weekly dose of woah, it appears that the purple and yellow image is created in such a way that it “oversaturates” V4, which is tuned for orientation, spatial frequency, and color.

Since V5 is the next processing step, it gets some “bleed over” activity from V4. Guess what V5 is responsible for? Motion. As such, the neurons firing in V5 cause you to see motion, even where there isn’t any out there in “reality”.

An artistic rendering of junk, revealing a hidden portrait of Ferdinand Cheval is this week’s Weekly Dose of Woah. [Read More…]